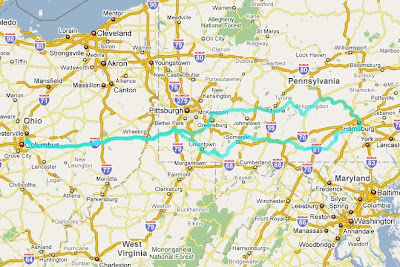 Memorial Day has long been a time for friends and gathering for my wife and I. Since our good friends, Curt and Jess M., moved back to their home state, we have made an annual road trip to see them.


This being the first year owning a touring bike, I thought this would be the perfect opportunity to stretch it’s legs (and add another state to my riding portfolio).  I had only one problem.  My wife, Erica, is not so much a motorcyclist.
Erica rides with me from time to time.  So long as it isn’t too hot, too cold, too wet, to sunny – well ok, that might be a little exaggeration but I think I made my point.  This was a long trip and I wasn’t sure she’d go for  it.
To my surprise, it didn’t take much to convince her that this was a good idea.  Between her understanding for my love of riding, a clear weather forecast, and a promise of plentiful shopping with Jess at King of Prussia (more in this in a second), she agreed.  I think all would agree that I married well.  :-)
I’m not sure if it occurred to Erica when she agreed to go that she wouldn’t have any way to get her purchases home but I’ll have to say that she handled it like a trooper.  A good sport,  she is!
Our route was carefully chosen to minimize the time spent in Ohio (been there done that) and maximize the time that we would have on PA two-lane roads.
Our departure from Columbus was early.  So early, in fact, that it might have been a contributing factor of me forgetting the digital camera.  It wasn’t until almost Zanesville, OH that I realized what I had done – and it was too late to do anything about it.
Fast forward a few miles and we hit Washington, PA.  The only real significance of Washington is that we turned southeast and ended our journey on the dreaded “super-slab.”  I shouldn’t be so harsh – it has its uses, I guess.
A quick stop just past, Brownsville to make the same dad-gum wrong “detour” turn as we did last year in the car -- then onto Ohiopyle.
We discovered the beauty of Ohiopyle last year on the way out to Washington, DC.  Ohiopyle wasn’t our intended destination, just a place that stuck in our mind after we passed through on our way to see Frank Lloyd Wright’s Fallingwater.
As it turned out, there wasn't much more to the town (village) than we had seen the prior year.  The draw here is the beautiful falls on the Youghiogheny River.  The place is usually teaming with whitewater rafters and outdoorsy types.  This trip was no exception.
My hope for Ohiopyle was to enjoy the mountainous natural beauty, and grab a bite to eat.  At least the scenery was nice.  There was only a place or two in town and neither one ticked my or Erica’s fancy.  It was hot and I think we were both thinking about the long journey ahead.
From Ohiopyle, we pushed northeast to catch US30 and ride all the way to Caledonia State Park.  The torturous construction zone before Chambersburg immediately followed by the rush hour stop-n-go of the town were a not so distant memory as we headed north on SR233.  I have to thank you Curt for this route recommendation as I am not sure we would have survived Gettysburg.
Several days spent with our good friends drinking and eating ourselves silly allowed Erica and I to reflect on the trip out.  We had some wonderful scenery, but having seen it and knowing what Chambersburg held, neither of us wanted to go back that way.
Curt and his Dad, Steve, were of great help in choosing a route back.  Minimal interstate, minimal toll, scenic, but not passing through many not so little towns like Chambersburg.
US22 was the road.  6:30 AM was the time.  The only toll road being PA Turnpike 66.  Exact change in (Erica’s) hand (the Internet rocks), and we were back to Ohio ready to do it again.
Posted by m at 9:59 PM