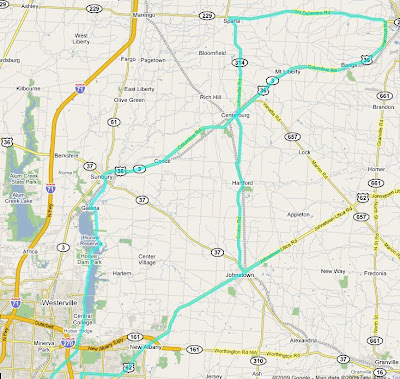 This post is about those roads that appear as grey lines. My "Official Ohio Transportation Map" describes these roads as "Selected Local Roads."

"Grey roads" are the roads less traveled. I am learning that of all the roads which appear on the map, these roads might have the most to offer. Not the most to offer as in shopping centers, rest stops, and such but rather, the most scenery, kindest people, and most importantly, the most character.

This was a nice evening after work. I started out in only my jacket and gloves but quickly decided that I needed to stop at the Hartford Firehouse and don the 'rocket pants. Just as I was getting ready to leave, the firefighters were dismissing their meeting. Two firefighters stopped and commented about how nice my bike was. "Thanks," I said back to them. Luckily, these kind people also had places to go and we didn't talk more than several minutes.

I continued from Hartford to follow more grey roads. Though technically not a grey road, I did discover SR229. It wasn't too far up the continuum from a grey road and became ever more interesting towards Mt. Vernon.

With that, it was time to head home. I tried to put myself in the direction of Lewis Center so that I could stop at a coworkers house but ran out of sunlight. The deer that crossed in front of me near Hoover reservoir reminded me why I don't like the ride the two lanes when its dark.
Posted by m at 9:26 PM

I agree with you that the Character of a Road is the most important attribute to look for in a Ride. The older I get the more I think this goes for humans as well. 10 years ago, I may have said style, looks or maybe intelligence but now I try to look at ones character of spirit.

Thanks for your comment, Rob. It's hard not to be philosophical when talking about riding. Who would have thought?

This must be a result of the fact that few words can describe the freedom of riding -- though I thought you did a pretty good job while talking about that Huffy over at your blog. :-)