around the Georgian Bay - part 2 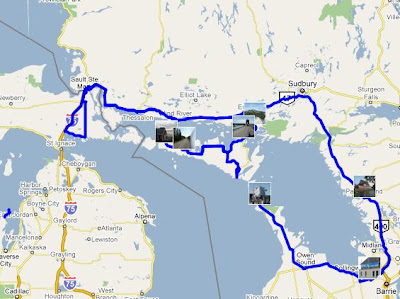 Parry Sound, ON to Manitoulin Island, ON Canada

The evening air was so nice we opted to sleep with the windows open.  This was a big, big mistake as there was a screeching train over the trestle outside our window seemingly every hour.  To be fair to the Inn, every waterfront B&B in Parry Sound is affected by the train noise – we just subjected ourselves directly to it by having the windows open all night.

Having been woken several times through the night, knowing that we didn’t have that far to travel and knowing that our ferry passage wasn’t until 4:40 PM, we took our time getting out of bed.  So much so that we opted to skip breakfast at the Inn.  You’ll read more about these flawed decisions shortly.

We decided to handle breakfast as we had the day before.  Our attitude was that we would cover a hundred or more miles and see what was available at that time.

Paid up, packed up, and heading out, we found ourselves going in circles before the GPS really gathered its bearings.

Just out of town the road opens up and quickly turns into Interstate.  Miles and miles pass with nowhere to stop to eat – I guess we should have known this.

Turning off of the super-slab and onto Highway 26, the promise of breakfast looked bleak – until out of the corner of my eye, I caught an image of a muffin.  Gold Mine!

A check of the traffic behind, I was hard on the breaks to “dive'” into the parking lot.  Confusion quickly sets in. Where are we?

What we had found wasn’t just a place to get some breakfast.  It was a jewel!  We were pleased to find the cafeteria to be clean and nicely decorated.  We had a great breakfast and enjoyed quite a long conversation with our server.  On the way out, we grabbed some pastries for our upcoming ferry passage.

Armed with the knowledge of every speed trap between Edenvale Cafe and Tobormory we were off for a leisurely stroll up the Bruce Peninsula – or so we thought.

We left the cafe at a little before noon thinking we had plenty of time since the Ferry to Manitoulin Island didn’t depart Tobermory until 4:40 PM.  The detail that your humble correspondent had overlooked was that the ticket clearly stated that we should arrive and check in one hour before sailing to guarantee our spot on the vessel.

Upon realizing my mistake, I though, “No big deal.  it isn’t that far to the ferry from here.”  Though this was true, I had no idea of the congested vacation towns and construction we would encounter.

Employing the knowledge about speed enforcement garnered from our friendly hostess, we briskly made our way up the road hoping like hell we would make it in time.  Did I mention that we were booked for the last crossing of the day?

Thankfully our haste delivered us to the docks of the MS Chi-Cheemaun forty-five minutes before sail.  We were low on gas and stressed out, but we had made it.  I would have never planned it this way.  What was the blur we had just passed through?

Waiting for the ferry to arrive allowed for a certain uneasiness to set in.  I had never been on a ferry in a car let alone with a motorcycle.  I knew that I was supposed to lash my machine down in case of rough water but I wasn’t sure exactly how to.  It didn’t help that the only other motorcyclist queued up to board had never done it before either.  Thankfully, just as the ferry was arriving, a Manitoulin local pulled up on his Triumph.  Once we were in the hold of the ferry, he kindly shared his advice with both of us greenhorns.  He even helped the other guy lash the bike down.

Erica and I took full advantage of the gorgeous weather during the crossing.  We sat on the viewing deck at the stern of the ferry.  The sun was shining, breeze was blowing, and the scenery drifted by as we enjoyed our pastry treats.  Something was missing though.  We had nothing to drink.

Since we had missed the chance to exchange currency at the border I thought it was hopeless that we would be able to get anything to drink during the crossing.  I couldn’t have been more wrong.  The full service cafeteria accepted plastic even while under way!  I filled up the largest cup available with ice and Sprite.  At the register,  I apologized to the lady for using a card to purchase a soda, and that it was all I had – except for US currency.  To my delight, I found that they even accepted “Green Backs.”  Too bad the change was Canadian but at least we had a little cash should a similar situation occur before departing the country.

The crossing was relaxing and uneventful.  There was never more than a light sway of the ship.  Good thing, as I wasn’t terribly confident in my knotting skills.  It was at least good enough for this crossing.

Taking full advantage of the first-on / first-off policy for motorcycles, we went down to the cargo area before the ship had stopped.  Once docked, the massive hull opened up exposing us to the bright sunlight.  It was exhilarating riding out of the hull of that ship knowing that Manitoulin Island was ours to explore.

I had previously made great efforts to map our way across the Island.  It was stored in the GPS.  All we had to do was follow the directions.  It was about 80 miles to our destination, Meldrum Bay.

Strait off Chi-Cheemaun and out of South Baymouth we went.  North on Ontario 6 to Government road, then west.  We should be to our destination in no time flat.  So goes the saying of best laid plans.  The roads which appeared as minor paved roads on the map were actually chip-n-seal with very loose gravel floating about the top.  Not my definition  of a paved road nor was it the best selection for 40 miles of travel across less inhabited lands on a loaded sport-touring rig.

Plan “B” sent us back out to Provincial route 6 north to catch 542 which cut through the heart of the Island and eventually met up with 540 which would lead us west to our destination.

Two things struck us while traveling across Manitoulin Island.  The first was just how beautiful the Island was.  The second was how sparse services such as gas stations were.  We were finding ourselves in need of gas in short order.

Our first stop for gas was on the “M'Chigeeng Indian Reserve 22.”  There was one pump with one handle, and mechanical readouts.  I began thinking to myself, “Why didn’t you get gas back in South Baymouth?”  It was too late though to second guess myself.  I stepped inside the station to inquire about a nearby premium pump.  “Just up the road here, he does a big “skiddoo” business.  He’ll have it.”

So up the road we went in search of Premium.  If it had been a dire circumstance, I would have, pumped the tank full of the budget friendly stuff but since we had options, I would do that right thing.

The next station had two pumps with mechanical readouts.  The owner was friendly and explained that the “skiddoo” were in fact what you and I might know as a snowmobile or Ski-Doo if you know them by brand name as many people know Kleenex brand facial tissues.  Whew!  Am I glad to have that one behind me.

Almost 7:00 PM and nearly 60 miles remained in the days journey.  Erica and I were both tired and hungry, but the road didn’t seem to mind.  Mile after mile passed with little more than a scenic panorama of water, a small house, or field.  Though we were ready to arrive at the Inn we were both blown away by the natural beauty of this place.

Nearing the end of our journey, we encountered deer crossing the road.  Thanks to an alert passenger, good brakes, and our helmet communication system, neither the deer nor the travelers were harmed.

Hungry, and travel weary we arrived at Meldrum Bay Inn.  The bay was spectacular and the Inn was exactly what we needed.  Meldrum Bay Inn dates from the 1870s and is now cared for by Shirin and Bob Grover.

We found our way to the bar where we met Shirin.  I think she thought we might not have been coming.  She promptly offered to show us to our rooms at which point I replied, “We’re more hungry than tired.”  Shirin immediately shouted to the kitchen, “Bob don’t shut things down.  Our guests have not eaten.”  Boy!  Did we feel bad.  Not for long though as Shirin wasn’t having any of it.

We ate dinner on the wrap-around porch near the hummingbirds battling for the “nectar” hanging above our table.  I’ve never before or since been so close to these little creatures.  We could hear their wings buzzing.

For dinner, Erica had white-fish and veggies.  I had (get this), smoked trout in a whiskey alfredo sauce.  Yum!  Since we were on vacation we finished with desert.

After finishing our meal, we noticed that everyone had gathered in the common room.  A couple visiting the Inn for the evening were playing traditional Irish folk music on their fiddle and flute.  It was so enjoyable and seemed like we had entered a dream world.

After an hour or so of Irish music and drinks, it was time to settle in for tomorrows adventure.