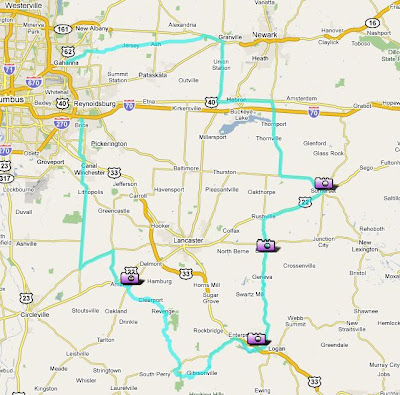 One of the cool things about the dealership where I bought the R1200 is that they regularly do semi-organized rides. From what I understand, the rides normally depart from the shop and almost always involve food.

From the moment I learned about it, there was never a question of whether I was going on the Hocking Hills ride. It was a chance to hang out with like-minded people and possibly learn of some new roads. This is all above and beyond being a really good excuse to get the bike out of the garage. :-)

The night before, Erica had excluded herself from participation because the morning was forecast to be a little chilly. In her defense, she hasn't any riding pants (yet).

The morning of, we learned just how chilly. It was some 28 Degrees Fahrenheit when I woke. As Erica repeatedly told me that I would be cold, I reminded her that the day was Forest to be a nice 58 Degrees Fahrenheit and that I had some really nice riding gear, heated seats, and grips.

The ride to the dealership wasn't bad except for the feeling that someone was stabbing pins into my cheeks. It had "warmed" to 30 Degrees Fahrenheit by this point. My gear was actually doing a great job of keeping me warm. The only problem was that my face was hanging out of my 3/4 helmet catching the cool breeze.

This clearly wasn't going to work for very long -- at least not without longstanding consequences (frostbite).

I was the second bike in the lot. Not long after I arrived, Ted (the guy who sold me my bike) arrived on his demonic monster of a motorcycle (this is another story for another day).

I'll have to say that Ted is one of the most generous people I know. He offered to loan me one of his personal balaclavas and/or show me the inventory on hand at the shop. Since his balaclava only solved my problem for the day, I opted to see the inventory. They had one just my size and weight and I was all set -- except that all the registers were closed because of it being Sunday. The owner, Mike Allen says, "...take it. Call us on Tuesday with your c/c and we'll run it." Can you believe these people!? They were more concerned with my comfort for the day that getting paid for merchandise that I was carrying out of their store. "Thanks guys!"

Having solved the first problem of the day, I joined Ted and other motorcyclist to solve the other problem -- hunger and the urge for coffee.

By the time we left the dealership it had warmed to nearly 40 Degrees Fahrenheit . The bike count rose to around 22 and rider count to nearly 30.

The route was one completely different that I normally take. We went south then east whereas I normally go east then south. The former route (south then east) was one that I will repeat on my own someday. The neat thing about this route was that we gradually entered the hills. We started out in plains and slowly entered the foothills. It was really cool.

I think I am beginning to understand why I love motorcycling. I've owned three bikes and ridden many others. I've accumulated more than three years and nearly 20,000 miles and yet I am still learning about the right gear for the weather, new routes to areas I frequently ride to, and constantly working to improve my riding. This might take a lifetime.
Posted by m at 4:58 PM